The Dr C.A. Valley T-10 Windball Competition 2018 is off to a rousing start. I have not watched an entire game but enjoyed the gasps, feigned bemusement, shouts of encouragement at the bowling, batting and fielding skills of both male and female players. I’ve chuckled at the bowler who went from medium fast to slow in one over. It’s a sight to enjoy. Many line the shaded walkway or take in sections of the game between classes on Wednesdays.

Here’s what makes the competition special. It’s a 20 over Cricket competition, but using a softball. Each team must bowl 10 overs. Each team must have at least one female player who must bowl one over, with the regular cricket bowling action. Teams are allowed to have two outside players who are not faculty or staff; none USC members are usually community members from the Maracas Valley area.

Games are played on Sundays from 1:00 pm, Wednesdays from 3:05pm and Fridays from 13:30 pm and is a hit with students and the public alike. The competition is carded to run from 22nd February 2018 to mid-April 2018. We’ve had five games so far and the School of Theology vs ASB was a humdinger with fortunes going back and forth. South Caribbean Conference (SCC) vs CUC Secondary School was a high scoring game.

I’m loving how the competition is going. Let’s hope the ‘Duck’ (Duckworth-Lewis System) does not have to come into play as the competition progresses. This is an excellent example of what makes USC the place to be!

This competition is part of S.P.E.D calender. We look forward to you joining us for remaining games! Discover USC S.P.E.D. 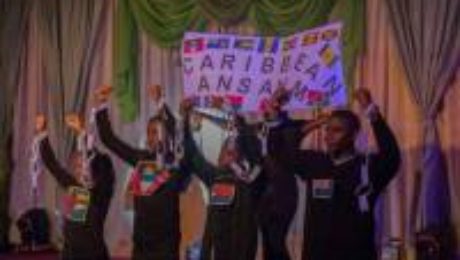 Culture; it is the very essence of who we are. The very tide that binds a person to their place of origin, it is a key part of our overall makeup. From national food to cultural wear, each of its components plays a key role in the shaping of our day to day lifestyles and the formulation of our individual identities. USC, like any other place, is not exempt from the influence of this phenomenon.

In fact, the institution serves as a melting pot of cultural diversity. Every year, such diversity is put on display in the week of activities referred to as International Students Week. The event seeks to capture the very spirit of the university by showcasing the various faces which make up its general population, through the various cultural clubs on campus.

This year’s event was run under the theme “USC Ansanm: Unity in Adversity”.

Ansanm (A-sum), a French Creole word meaning “together”, suitably captured the mood set for this year’s festivities. The theme was selected in retrospect of the recent events which rocked the islands during the past few months. Hurricanes battered and bruised the likes of Antigua and Barbuda, Dominica and the Virgin Islands, in what had been the worst season in decades. For many of the students, these storms literally hit home as they were forced to pick up the pieces left by the mayhem. The idea was to showcase how the region could be united in spite of the obvious turmoil present.

The week got off to an absolute flyer as the administration car park played host to an array of booths, each representing a different cultural club, each of which was aptly decorated to showcase the unique culture of that particular group. As well as some fun facts about the various destinations, each club treated the public with a taste of cuisine typical of that specific group of people, adding flavour.

On Wednesday, students took part in the annually held Parade of Nations. The atmosphere was dense with sound as the various groups lifted their voices, declaring in unwavering fashion the greatness of their various clubs. Chants could be heard from all across the campus, drawing out crowds of onlookers in vast numbers. It was truly a sight to behold.

For the first time in its history, the week of activities also included a pageant, suitably dubbed “Mr and Mrs Culture USC”. Contestants from each of the clubs (one male, one female) sought to showcase what exactly each of their territories had on offer through oral presentation, cultural wear, and various talents, presenting themselves as poster children for the greatness which the region can produce.

The week’s events culminated in a grand night of cultural display. Never before had the atmosphere in the school’s auditorium been quite like this. The noise was almost deafening and the ambience altogether hair-raising. As pageant contestants made their final appearances showcasing their cultural wear and talents for one final time, it was quite certain that the final decision would be a difficult one. After a long deliberation (with an amazing light show during the intermission), the results were finally in. “Mr and Ms Culture USC 2017” went to the dynamic duo from the Republic of Guyana, with St. Lucia reclaiming the coveted “Best Booth” award.

In retrospect, if the week’s events taught us anything at all, it would be the power of togetherness. The bonding that occurred amidst the heartache and pain simply displayed the grit and determination we have as a collective, altogether showcasing the true power of true “Uscianism”, the culture of us. 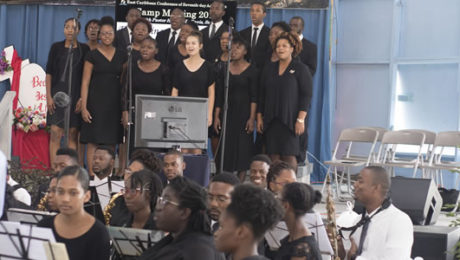 Sitting in the audience listening to the USC Group’s rendition of ’10’000 reasons to love our Lord’ in Barbados, many listening would be hard pressed to truly appreciate the challenges the group faced just to be present. This was Saturday 31st, 2018 at the East Caribbean Conference’s National Convention held at the Oldbury Campsite.

What were these challenges? Here’s just a few. Not all members made the trip, and some key members of the group were not there. Personal items for some members did not reach. Some equipment was left behind. Even before leaving some questions were raised as to whether some of the equipment could even be taken on the small aircraft. Traveling parents became team chefs by default and well laid plans seemed to be useless given the unexpected circumstances. Sure there were moments of frustration, but there were more moments where God’s amazing Providence shone through.

Put aside the challenges for a moment and take in the delivery of two items by the choir and orchestra during the Sabbath morning service. Sure the numbers were depleted but just listening to the two renditions, one would not know. The rendition medley ‘Bless the Lord oh my soul’ seems to have been delivered from the souls of musicians and singers alike giving thanks to their Creator for the highs and lows of the ongoing trip. The two pieces were rendered with gusto! They were well received by the packed congregation consisting of the main hall and two overflow tents. This was music, rather praise, not delivered with numbers, but with heart.

My mind reflected on the biblical story of Gideon, who to what seems like a humanly small number, delivered a great victory with merely 300 men. There were a few in the USC Trinidad contingent who’ve heard the full voice and musical complement. Amazingly, from the fifteen (15) choir members and musical ensemble members present, there was no difference! I think God understood, and angels helped out.

The USC Music group provided two pieces, the second immediately before the speaker of the day took to the podium. Barbadians love good music and the loud amens and extended clapping evidenced that the music was well received. Identifying myself as a group member many offered their thanks for the top class renditions.  This was an opportunity to remind them not to miss the concert: there will be more!

I’ll share some comments from the local church members: ‘that music was real class’, ‘Hislop real like his music’, ‘boy dem people could real sing!’. But I like this one best, from a Barbadian with a ward presently studying at our main campus: ‘now THAT is what you call USC Music!”.

A Sunday of food delights, reflecting on the USC Music Brunch 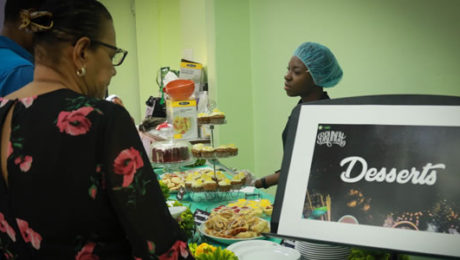 I arrived at the Music Department’s Brunch on Sunday 25th March 2018 rather late, figuring I had missed all the food delights. I knew it was a food event but did not anticipate the sumptuous spread that awaited us.  Warmth emanated from the hosts and hostesses who dressed in all black, were busy making sure everyone was seated and well taken care of. I was seated and served by a smiling and amiable first-year student of the School of Sciences and Technology student, Ms Jordan Hercules, who seemed to be thoroughly enjoying her role.

Due to my late arrival, I decided to select items that were still available, thus putting together a dish of tomato choka, sun-dried tomato hummus, roasted potatoes, eggs and croissant after which I settled down to eat. My host then offered juice and lemon water that completed my meal.

The band was now in full 80’s jazz mode and Music Coordinator Kerron Hislop donned an ‘old time’ felt hat and provided sax accompaniment to the band. The scene reminded me of the old TV Jazz shows of the 70’s: I enjoyed the memory throwback. Many were focused on engaging conversations and enjoyable food, but rapturous applause broke out as the sweet music offered, had moments of magnificent crescendos.

Now back to my meal, I was reflecting on how effortlessly, and with love, my eggs were prepared. The choka was on point: a spicy, peppery taste, with just enough fire to resist ‘liquid cooling’. Simply put it was great food in a great atmosphere.  Many of the team members who made this event a success were 1st and 2nd-year students from various disciplines, some of whom are not even music majors but nonetheless, seemed to truly enjoy a day of service.

The food was awesome and I look forward to the next Music Department food event. It’s great to have a reminder that USC is more than an academic institution: it’s a training ground for service, to God and humanity.

Alumni among the top 20 selected for Howard University award 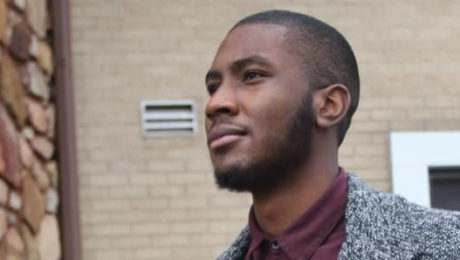 Ross Adam Parkinson, USC alumnus and gifted scholar was recently accepted to participate in the Pre-Law Summer Enrichment Programme (PLSEP) at Howard University School of Law. He is among a select group of 20 academically gifted students chosen among 2000 other applicants. Mr Parkinson, a current student at Oakwood University, USA, was also honoured for his academic achievement on April 5, 2018, at the University’s Honours Convocation Ceremony. He will begin the PLSEP on May 29, 2018.